Dramatic Finish to Round Two

Two complete rounds are in the BISERGS books, and Rodrigo continues to set the pace.  For the World Cup teams, the round came to a close in dramatic fashion as Portugal scored an equalizer five minutes into stoppage time to keep their slim hopes alive.  The US had come from behind to take a 2-1 lead and seemed set to advance out of the group of death, but a last gasp goal means they still have a lot of work to do against a very difficult German team in their final group match.  In America's Group G, every team still has a chance to qualify and no one has been sent home yet.  In the two group H matches yesterday, the group favorite Belgium looked uninspiring once again, but managed to steal a 1-0 win over Russia at the end.  With the victory, Belgium advance to the next round.  The Algerians continued Africa's second round resurgence 4-2 win over South Korea.  Rachel and Bill will be happy with their fourth round pick, Algeria, who brought them 5 BISERGS points on the day. 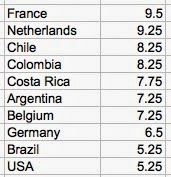 Rodrigo scored more points (12.75) than anyone else in round two, just as he did in round one.  He now has a total of 27.25 points and continues to lead.  Allison is in second place after two rounds behind her impressive 12 points in round two.  Rachel also scored 12 points in the second round and has made up for her slow start and is now tied for 9th place overall. Fewer points were scored in round two than round one, but in addition to Allie and Rachel, Max, Carol S., James, Bill, Evan, Brian G., Emmett, Nate, Matt R., Dawn, Derek, Emilie and Hudson enjoyed more points in round two than in round one.  France has yielded more points for its owners (9.5) than any other team so far.  The Netherlands have also produced over 9 points in their first two games.  Chile, Colombia, Costa Rica, Argentina, Belgium, Germany, Brazil and USA round out the top 10.

Of course scores are important at this point, but having teams continue into the next round is an even more important indicator of future BISERGS success.  Allison, Brian M., Doug, Matt S., Renee, Rick, Rodrigo and Sharleen already have two teams qualified for the next round.  Andrew, Carol B., and Renee are the only participants to have two teams eliminated.  There is still all to play for in the final four days of group play as teams not only try to qualify, but ensure the best route to the World Cup final by winning their groups.